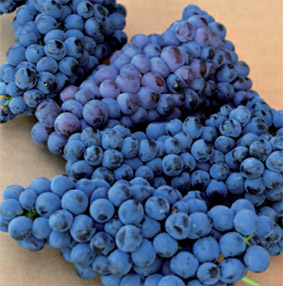 Chiaretto? I must admit I knew very little about the wine before being invited by the Consorzio Tutelavino Bardolino DOC for a 6-day press trip. Chiaretto (key-ar-et-toh) derives from the Italian term “Chiaro” meaning light or pale, a pale pink wine made primarily from the red grape Corvina (plus Rondinella and a bit of Sangiovese), which is also found in Amarone, Valpolicella, and Bardolino. With only a small amount of skin contact, the juice retains this pale pink color that gave it its name. The grapes are grown near the largest lake in Italy, Lake Garda, located in the northern part of Italy, a 30-minute drive from Verona. Its fragrances range from flowers to herbaceous tones; from citrus fruits to apricots and wild berries; all accompanied by hints of spice, like cinnamon, cloves or vanilla. On the palate, Chiaretto offers youthful, mouth-watering freshness. It is made from red wine grapes using white winemaking practices. Rosé is a type of wine that incorporates some of the colors from red grape skins but is not colored enough to be called red wine. An additional feature of rosés is that they tend to be low in tannins. In 1968 Bardolino Chiaretto was amongst the first appellations in Italy to be awarded the DOC Designation (Denominazione di Origine controllata).

There are around 100 producers of Chiaretto and Bardolino and 6,700 acres of vineyards. In 2007 less than 375,000 cases were produced. The whole appellation (including both Bardolino and Chiaretto) used to be around 2,500,000 cases, 330,000 cases of these were Bardolino. Nowadays total production is 26 million bottles (yields per hectare has been reduced) which means 2,160,000 cases. 1,000,000 of these cases will be Chiaretto.  www.chiaretto.pink

Chiaretto goes with everything: It is perfect as an aperitif, for informal lunches or barbecues as well as for elegant dinners. Chiaretto pairs wonderfully with appetizers and finger food. It also goes perfectly with Italian pasta or rice dishes, ravioli and pizza. It is excellent with saltwater and freshwater fish that is grilled, baked, cooked in salt, boiled or even raw. It’s a fantastic wine for Asian food (even the spiciest) and is superb with sushi. It retails in the $12-18  (USD) range making it affordable.

Everyone knows that Rosé is hot! It is the fastest growing wine category in the US. In 2017, the consumption of rosé wines in the US increased by roughly 50%. By comparison, the overall use of wine grew by 4%. The rate of growth for rosé consumption is even more pronounced during the summer months—a period where rosé consumption typically peaks. Four countries produce more than 75% of the world’s rosé. France with 30%, (think Provence, Languedoc-Roussillon, Rose d Anjou, Tavel, Champagne Rose). Spain (20%), the US, with lots of white Zinfandel (15%) and Italy (10%). Italian Rosé production is expected to rise significantly over the next several years.

On the eastern, Veneto, side of the lake rosé is known as Chiaretto di Bardolino. These are light, refreshing wines with minimal color. Chiaretto di Bardolino is typically made from a blend of Rondinella and Corvina. These wines feature notes of fresh citrus, grapefruit pith, orange, and tangerine, along with red fruit notes of raspberry and strawberry as well as flavors of apple and pear. They feature balanced acidity with a creamy quality and a refreshing, slightly bitter note on the finish. 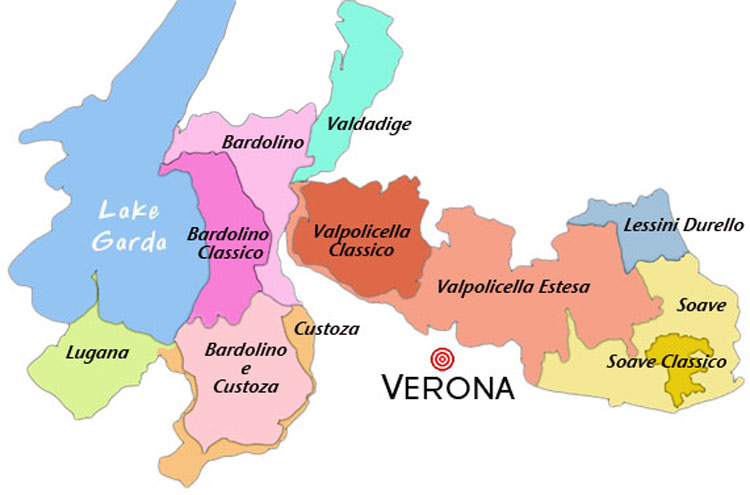 Chiaretto can be produced in any one of 16 villages along the eastern shore of Lake Garda. The soils here are primarily glacial moraines of sand and gravel. The western side of Lake Garda is in Lombardy and was historically known as the Valtènesi. The Rosé wines from this area are also called Chiaretto. Since 2015, a specific DOC for Chiaretto has been designated: Riviera del Garda Classico Chiaretto. There are 10 villages in this DOC that can produce Chiaretto. Many producers use both the Valtènesi and Riviera del Garda names on their labels to avoid confusion. The Rosé wines from this area are made with Gropello grapes or with blends of Gropello, Marzemino, Barbera or Sangiovese. Gropello must be at least 30% of any blend. Small quantities of Cabernet Sauvignon, Cabernet Franc, Carmenere, and Merlot can also be used. This region is less known than its Veneto cousins across the lake. 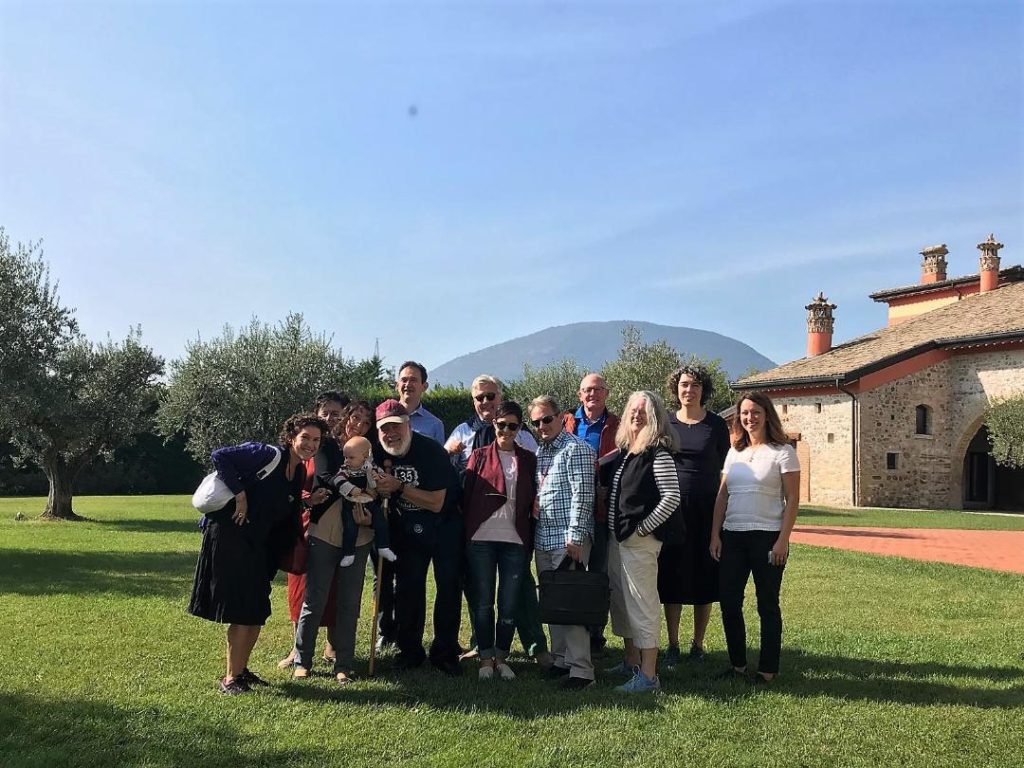 I was one of 20 journalists from the US, Canada & the UK to learn more and write about the Rose wines called Chiaretto. I will not rate the wines but merely tell the story of our visit, day by day.  Picked up at the airport in Venice and driven 1 ½ hour to the village of Bardolino and my home for 6 nights was Hotel Caesius, an expansive 4-star Lakeside hotel with 114 rooms and 24 family suites. 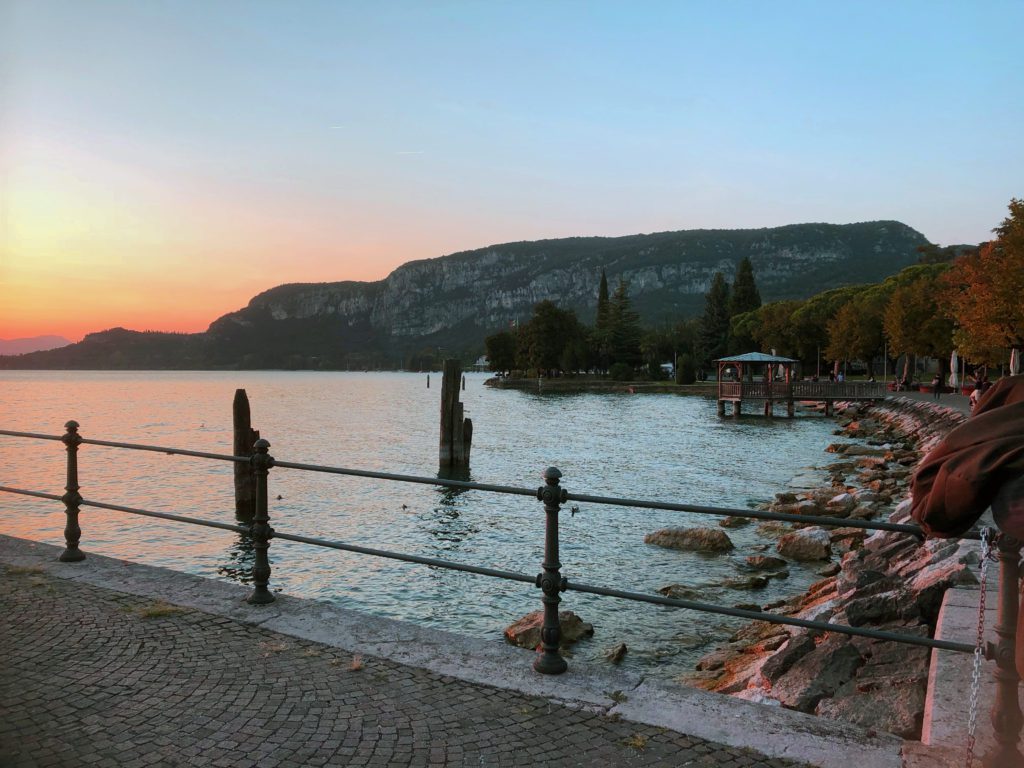 After unpacking it was exploration time. I used one of the three outside pools (it was around 70 degrees) as well as the large indoor thermal pool. The next day I tried the smaller indoors-thermal baths inside the spa. I met most of the other journalists (a few were coming a bit later) in the lobby, and we were off for a tour of the southern shore of Lake Garda and dinner with many of the producers at Menapace Restaurant pairing freshwater fish and Chiaretto. www.hotelmenapace.it 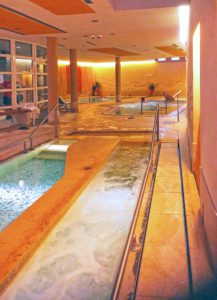 We had a vertical tasting of Bardolino, followed by a light lunch and a stand-up comparative tasting of Bardolino and Beaujolais with the producers. There was a break before the sit-down tasting of Bardolino wines awarded the Gambero Rosso Tre Bicchieri (3 Glasses or The Best in Italy) followed by the Beaujolais as mentioned above Cru tasting. During the break, I toured the downtown area including the Arena di Verona and Piazza delle Erbe as well as a local wine shop. Dinner was at Sapore Downtown pairing Pizza and Chiaretto. www.boscorenato.it

Monday it was off to taste at Albino Piona and Monte Zovo (lunch). Then a few hours break at the hotel (thank you Irene) before a tasting at Santi winery where we had dinner.

Tuesday our morning tastings were at Monte del Fra and Tinazzi Tenuta Valleselle (lunch). Another rest break and we were off to Vigneti Villabella and dinner at their Michelin Star restaurant Il Ristorante Oseleta. They offered a six-course gustation menu (110Euro) with wine pairings by their sommelier (45Euro). 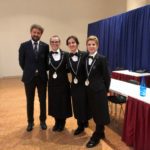 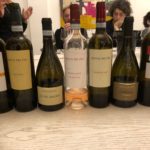 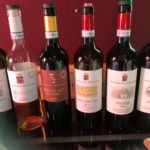 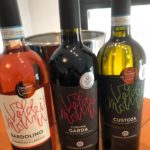 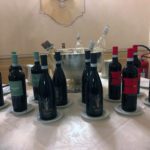 Our last day we had our morning tastings at Villa Calicantus and Guerrieri Rizzardi (lunch). Our final dinner was at Forte di Pastrengo where we had two Masterclass tastings- A vertical tasting of Chiaretto from 2014, 2015, 2016 and 2017. This was followed by Italian rose wines from native varieties. Many of the producers joined us for dinner.

This trip was sponsored by the Chiaretto/Bardolino Consorzio. I was unfamiliar with Chiaretto before the trip, as were almost all the other journalists. Visiting 3 wineries a day plus a full day seminar/tasting made me a believer. Don’t take my word buy a bottle and see for yourself.